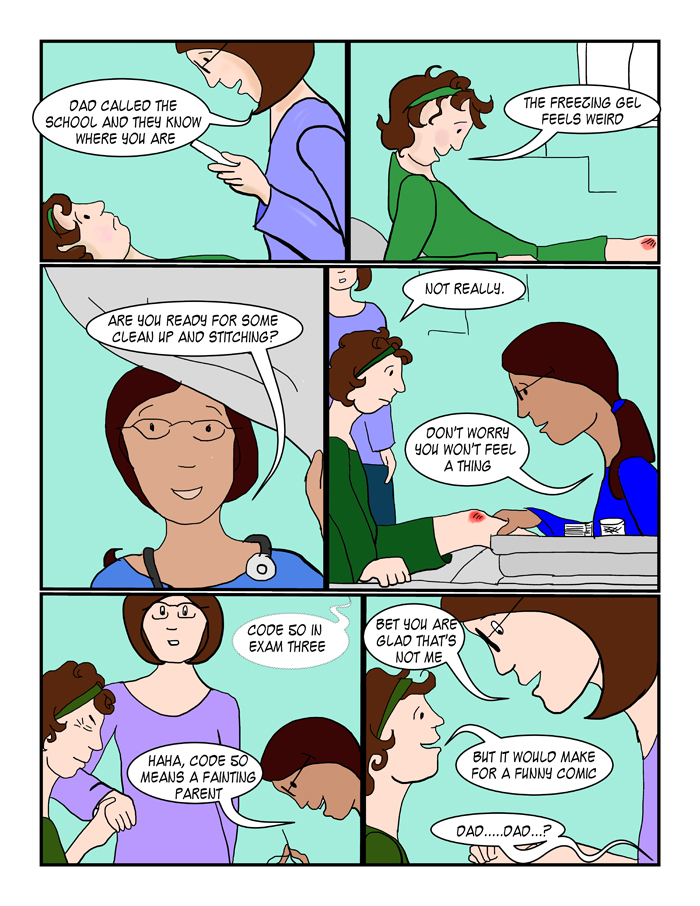 Claire is getting stitches, and she and Hope are being very Meta about the comic.  Personally I find it very interesting that the children’s hospital has a specific code just for adults fainting, I’m surprised it happens that often that they actually need a code for it I guess.

Our doctor told us that dads statistically faint more often than moms, I think it’s just a question of which parent the kid runs to when they are bleeding – at some point you get acclimatized.

Behind the Scenes – the Astropad Review

I’m still having lots of fun playing with the Astropad, and now that I have a new stylus (Adonit Jot 4) I have to say that the system is pretty slick.  The iPad works just like a drawing tablet, and there is almost no lag for me when plugged directly into the USB port of my MacBook, and only a slight lag when working unplugged on Wi-Fi.  The lag is quite bearable though because Astropad has a magenta “tail” that shows where you have drawn even if the mark from your selected tool doesn’t show immediately.  So you always know where you are.

I have used the app with Manga Studio, Illustrator, Photoshop and Mischief and it worked great with all of them.

I do wish there was a way to save shortcuts for each program in a “profile” type thing in the app.  As it stands right now you set your shortcuts and if you switch apps you have to manually switch your shortcuts too (if you are using them).

Oh – and battery life… the app doesn’t seem to drain the battery anymore than regular use does. I worked with it on Wi-Fi for almost two hours and saw a 5% drop in battery reserve during that time.

So I would say that all in all this was a really happy experience for me.